It’s a month since we last looked at the ASX benchmarks. Over the month the ASX200 has bounced from its significant support zone between 4925 and 5000 up to a forming resistance zone between 5275 and 5330, and straight back down to currently be positioned right in the middle of the significant support zone of 4925 to 5000. The support and resistance zones are shown with blue rectangles.

The decline over the last five trading sessions has been sharp, caused mainly by the Chinese introducing percentage circuit breakers to ironically reduce volatility, with the backdrop of continuing weakness in commodity prices, especially oil and hence energy stocks the world over.

The other elephant in the room, (there are a few!) is the effect of the December interest rate rise in the United States which is now behind us and should already be factored into the markets. 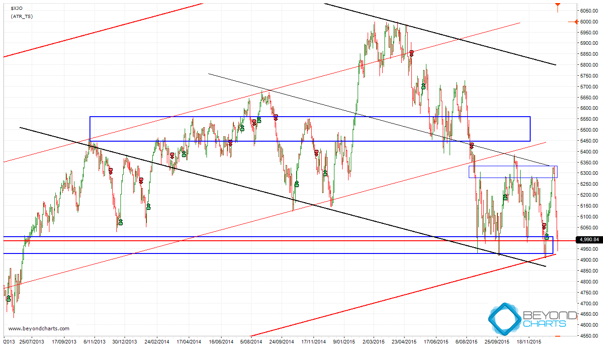 So here we are again a month later in the same situation, de ja vu. Will this strong support zone on the ASX hold in today’s trading session and the sessions for the rest of this week. Or will it break?

It has held numerous times since August 2015, each time that it holds adding more and more significance to what happens at this zone. What are the scenarios?

Secondly, If the ASX200 falls below the support zone and remains there for greater than two weeks then technically the odds rise that the ASX200 will further, potentially to the next support zone which is at 4500 to 4625. This would obviously not be a good outcome and would set up 2016 for being a volatile and negative year.

Stepping back and looking at the big picture, whilst things can always get worse and prices can always go lower, the current situation is: